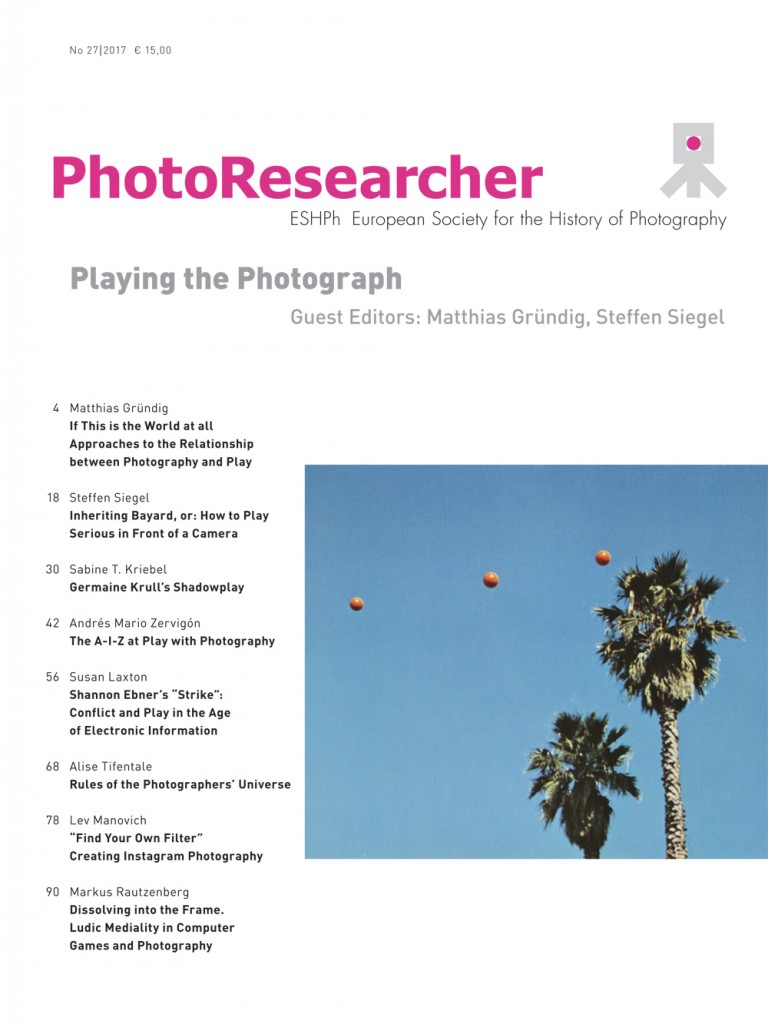 It may sound strange at first; the combination of words just doesn’t seem to fit properly: Playing the Photograph. And it is supposed to. How does one play a photograph? Like playing cards maybe, the ace of spades or even the joker? But then, what are the rules, and are there rules at all? What would it mean to cheat while playing a photograph? Maybe photographing is to be understood more like throw-ing dice — whatever one tries to capture, in the end, it’s often pure luck that decides upon success or failure and how decisive the moment actually is? Unlike »Photography and Play«, our interest in »Playing the Photograph« does not suggest having a definite answer to the multitude of such questions. Playing, here, is not supposed to point to a self-contained field of study that intercepts with that of photography. Instead, the articles in this issue direct our gaze to the diversity of sometimes rivaling understandings of play — be they aleatoric or strategic, childish or subversive — and they ask what practices of photographic play could look like. Playing is a serious issue. At least it is now more serious than ever. The evolution of the video game industry, which has long surpassed movie industries financially, and the so-called gamification of different spheres of our reality, of economy, marketing as well as work-lives have merely underlined the need of understanding not only contemporary ideas of playing and gaming. Today, it is hard not to play in one way or another, willing or not. Ideas of play are, however, historically entangled with those of leisure, subversion, and freedom.

Table of content: Matthias Gründig: If This is the World at all Approaches to the Relationship between Photography and Play ● Steffen Siegel: Inheriting Bayard, or: How to Play Serious in Front of a Camera ● Sabine T. Kriebel: Germaine Krull’s Shadowplay ● Andrés Mario Zervigón: The A-I-Z at Play with Photography ● Susan Laxton: Shannon Ebner’s Strike: Conflict and Play in the Age of Electronic Information ● Alise Tifentale: Rules of the Photographers’ Universe ● Lev Manovich: »Find Your Own Filter«. Creating Instagram Photography ● Markus Rautzenberg: Dissolving into the Frame. Ludic Mediality in Computer Games and Photography